Why Should You Hire Security Armed guard for Your Business? 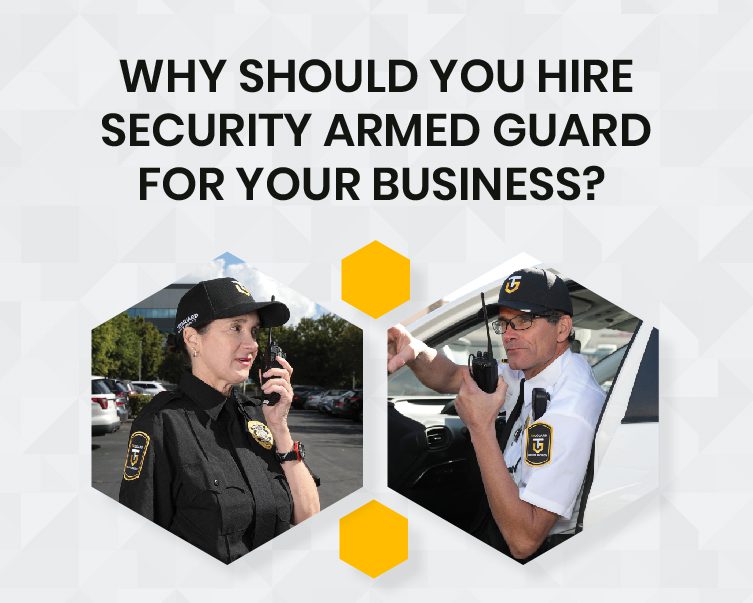 Armed security officers are a great way to protect your business. They can help in many ways, such as providing surveillance services and ensuring that the premises remain safe from intruders. Armed guard security personnel are trained professionals with extensive training to deal with any situation effectively. They are trained in firearms and other weapons, and they have the power to detain people who pose a threat to your business. Armed guard companies can also help you prevent theft by monitoring employees and visitors. At the same time, they will serve as an additional layer of security for your business premises.

The main reason for hiring an armed guard is safety

There are many reasons that hiring armed guard companies may be beneficial to your company, but most business owners are not aware of the many benefits.

Armed guard security personnel are trained to handle dangerous situations and provide an important service for businesses. They can deter criminals and help prevent theft and vandalism at your location. Additionally, they can help keep your employees safe from harm by keeping them away from potential hazards or watching over them while they complete their tasks so that no one gets hurt. Armed guard security personnel can also keep customers safe from harm by keeping them out of harm’s way while they shop at your store or restaurant. This protects both parties involved in any interaction with each other. A good example would be if someone tried taking something without paying first – both parties could end up getting hurt because they didn’t know what was happening!

An Armed security officer can help prevent crime by keeping your business safe and secure. This means they will patrol the premises, checking in on employees and customers to ensure they are not being harassed or harmed by anyone else who may be on the property.

Armed guard security personnel can also keep businesses running smoothly by ensuring no one gets into areas where they shouldn’t be. This ensures that everyone keeps their hands where they should be at all times—and it also makes things easier for them when it comes time to check IDs!

For example, the average annual salary for an armed guard is $32,000 per year (as of 2017), whereas you’ll pay between $40 and $80 per hour for armed guard companies in most cities. If your business needs more than one person on staff at any given time, this can add up quickly!

Armed guards can help in emergencies.

Armed security officers can help in emergencies. When you have an armed guard on duty, he or she will be able to deal with any situation that might arise. The armed guard will have access to weapons and other equipment which can help him/her in case of an attack or a robbery.

Some of the major advantages of hiring Armed security officers include:

They have been trained to handle situations like fire attacks, gas leaks, etc.; they know how to use their weapons if necessary, so they don’t panic when faced with any dangerous situation.

Having these professionals around means that there won’t be any panic among customers when something goes wrong at your business premises.

They will also know how best to care for injured people who may come into contact with chemicals used during construction projects or clean-up operations.

They can provide surveillance services.

Surveillance services are an important part of any security plan. They can provide a wide range of benefits, including:

Increased safety and security for employees and customers alike.

The ability to track suspicious behavior or activity in real-time, so you know who’s doing what and when they’re doing it.

A way to identify potential threats before they become problems (so your business doesn’t have to deal with bad publicity),

Security guards are trained professionals who specialize in providing surveillance services. To ensure you hire an effective security guard agency, consider these factors:

Armed security officers have many other benefits

Armed security officers can provide many benefits to your business. These include:

They are trained to handle situations. Guards who have received training in handling and responding to emergencies, including active shooters and other dangerous situations, can provide valuable assistance in times of crisis.

Armed security officers are less expensive than regular police officers because they do not require a large salary or overtime payments like those made by police officers do; instead, they will require only their salaries as well as any additional expenses that may arise from providing this service for you or your business (such as gas).

In addition, Armed security officers tend not only to be cheaper but also more effective than regular police officers when it comes to protecting businesses against threats such as burglary, primarily because armed personnel can engage criminals without having to deal with complex procedures!

The world is a scary place. There are many reasons that hiring armed guard companies may be beneficial to your company, but most business owners are not aware of the many benefits. The main benefit of hiring an Armed guard security personnel is safety. A security guard on site can help prevent theft, vandalism, and other types of crime. Another big benefit of hiring an armed guard is that they can give you peace of mind. Business owners should consider hiring a security guard to keep their properties safe.

Armed security officers are an excellent choice for protecting your business. They are trained to respond quickly and professionally in any situation and can help you prevent attacks by deterring assailants with their presence. Armed guards can also provide surveillance services to keep your business running smoothly.

For more information on our security services, contact us now!

Next
How To Pick The Best mobile patrol security guard

We have been delivering comprehensive security guard services dedicated to providing the solutions required to protect the safety of your communities,  important assets, employees, staff, family and more.

TruGuard Security operates 24 hours a day 7 days a week. Contact us today for an immediate response.